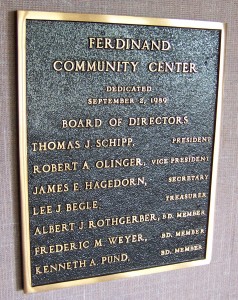 In July of 1984, a group of community minded individuals, led by Tom Schipp, met to discuss the feasibility of purchasing a tract of land near the north side park with the idea of building a community center.  In August this group met with local businesses and industries to determine if sufficient funds could be raised to help purchase the land and build a community center.  In September of 1984, the group met with an attorney and filed an application to the State of Indiana requesting incorporation of the Ferdinand Community Center as a not-for-profit corporation.  The original board included Tom Schipp, President; Andy Olinger, Vice-President; James Hagedorn, Secretary; Lee Begle, Treasurer; and Board Members; James Treat, Fritz Blessinger, and Albert Rothgerber.   Fred Weyer joined the board in 1985, replacing Fritz Blessinger who passed away and Ken Pund replaced James Treat who moved out of town in 1988.  Tom Schipp served as President of the Board from 1984-2001 and remained on the board until 2002.  Andy Olinger took over as President in 2001 and served as President for the next 4 years.  In 2005, Lee Begle was named President and continues to serve as the current President of the Board.

In the next few months the board raised $60,000.00, enough money to purchase a 12.28 acre tract of land in January of 1985 from Robert A. Leinenbach.  The board then established a set of goals and time-lines to raise enough money to build a 12,000 square foot facility.  On April of that year the board along with fifty community members kicked off an official fund drive that included lifetime memberships.   Fundraising continued over the next three years and on June of 1987, an official ground breaking ceremony took place.  Bid letting for construction took place on December 1988 and general construction began on the community center building in March of 1989.  On September 2, 1989, the facility held a Dedication and Grand Opening Ceremony.

During the years leading up to the grand opening, membership continued to grow to over 800 members.   The lifetime membership for those joining in the first year was $250.00 and those donating $1,000.00 or more were given Honorary Charter status.  Following the initial campaign, lifetime membership rates moved to $300.00 per family.  Thanks to the generous support from local businesses, industries, and 800 plus members, the Ferdinand Community Center had enough money to build a facility that was much needed in the area.  The building includes a large community room that has a capacity of 800 and a meeting room that can accommodate up to 80 guests.  The board added approximately 1000 square foot storage room onto the facility 8 years after the opening.  The facility has hosted a large number of wedding receptions and other celebrations.  It also has been used for auctions, gun shows, community events, corporate events, home shows, and a variety of other entertainment.  The most significant thing about this facility is the fact that not one tax dollar was used on the construction of this facility.  Every penny was derived from donations and memberships, a testament of the true cooperative spirit of Ferdinand and the surrounding area.  The facility was built on 1710 Community Drive.

The current community center board of directors include Lee Begle, President; Andy Olinger, Vice President; Randy Greulich, Secretary; Ken Pund, Treasurer; and Board Members, Don Mohr, Greg Dilger, and Brett Schipp, all volunteers.  Mark Oser also served on the board for a six-year period of time from 2002-2008 and Paul Weyer served on the board from 2008-2020.  Current salaried positions include a booking manager and cleaning personnel.  The facility hosts around 35 weddings per year and a number of other club meetings and community events.

In May of 2009, the Community Center Board made the decision to donate 5.55 acres of community center property to help pave the way for two significant additions to the Ferdinand community, a library and a YMCA.  The library was built on 1.95 acres and the YMCA was built on 3.6 acres of land.  These two facilities, combined with the Community Center and the 18th Street Park, provide the Ferdinand community with tremendous social, educational, and recreational opportunities.

Thanks to a significant donation from the Mobel Foundation and the Art Ruhe Family, the FCC board voted to expand the Mobel Room in 2021.  The new addition which was completed on November 1, 2021, doubled the size of our existing room and also added space for two restrooms, a storage area and utility closet.  Our new space can now accommodate up to 180 guests and makes a nice compliment to large weddings and is ideal for smaller weddings, meetings, and family parties.  We are also grateful to the Dubois County Foundation and a collaborative effort including the Ferdinand Community Endowment, the Ernie and Olivia Weyer Family Endowment, The Seufert Construction and Supply Co. Endowment, and the Fund for Dubois County.  We also received support from the Jim and Laverne Uebelhor Endowment and other individual donors.

This site uses Akismet to reduce spam. Learn how your comment data is processed.

If you have an interest in booking an event at the FCC, please call (812)367-1989, or you can email fcc@psci.net and leave a message with your name and contact information as well as a brief message.  Our booking manager will get back to you within 72 hrs.  If you are simply interested in open dates, please go to our web page ferdinandcommunitycenter.com and open the calendar to view open dates and our current rental rates.  We look forward to working with you.